A century after Austria Post’s forerunner deployed its first electric vehicle to help deliver the mail in Austria, the national postal operator is now pushing to expand its electric vehicle fleet to 1,000 vehicles.

The company has launched a new E-Mobility Post programme in partnership with the federal government’s Climate and Energy Fund, and is now trialling seven all-electric tricycles as it prepares to more than triple the size of its current 265-strong electric vehicle fleet by 2015.

The vehicles being tested are DXP machines supplied by Swiss manufacturer Kyburz, which last year scooped the World Mail Award for Technology.

The Kyburz DXP has already been tested or deployed by European postal operators including Belgium’s bpost, Luxembourg Post, Norway Post and Sweden’s Posten, as well as Swiss Post.

Austrian Post said the vehicle can carry 120kg of mail, with a range of up to 100km on a single charge. The company will initially be using the vehicles in Vienna, Lower Austria, Upper Austria, Salzburg, Styria, Carinthia and Tyrol.

It comes as part of the company’s efforts since 2011 to provide carbon neutral delivery services.

“We have set out to continuously reduce the carbon dioxide emissions of our company, and this is another step on that path,” said Austrian Post CEO Dr Georg Pölzl.

“Over the coming months, we will assess these new vehicles to see how suitable they are for our purposes. But, while we do this we are also looking at other new vehicles, including an electric-powered quad bike.”

A century later, the company has an electric vehicle fleet comprising 167 electric bikes, 80 electric mopeds and 18 electric vans, all in daily use under its climate:active programme. 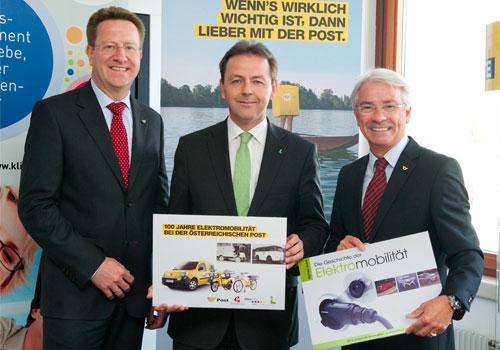 Austrian Post has been provided EUR 3.4m by the government’s Climate and Energy Fund to help it develop the electrification of its fleet.

The funding is part of the Climate and Energy Fund’s Climate:Active Mobile programme, which is helping various regional organisations to develop environmental transport initiatives.

As well as deploying electric vehicles, Austrian Post’s E-Mobility initiative also prioritizes the powering of those vehicles using renewable energy sources. As part of the programme, Austrian Post said it is planning to build a new solar power facility on the roof of its main Vienna mail centre to supply clean energy to its electric vehicles.

http://www.parcelfromchina.com PFC EXPRESS: the news just reprint,only by the purpose of information, does not mean that endorses the idea or prove its description. The article content is for reference only)