UPS to expand use of cleaner LNG fuel in US fleet

UPS is stepping up its plans to use liquefied natural gas in its US domestic transport fleet, with the purchase of 700 new vehicles and development of four refueling stations by the end of 2014.

The company said when complete, the project will see its LNG fleet as one of the largest operated in the US.

The Atlanta-based integrator has been using natural gas as a fuel for vehicles for more than a decade and says that fuel prices are 30-40% lower than imported diesel.

With US natural gas production ramping up, the world’s largest package delivery company said it intended to invest more aggressively in natural gas infrastructure to benefit.

UPS chairman and CEO Scott Davis said: “LNG will be a viable alternative transportation fuel for UPS in the next decade as a bridge between traditional fossil fuels and emerging renewable alternative fuels and technologies that are not quite ready for broad-based long-term commercial deployment.” 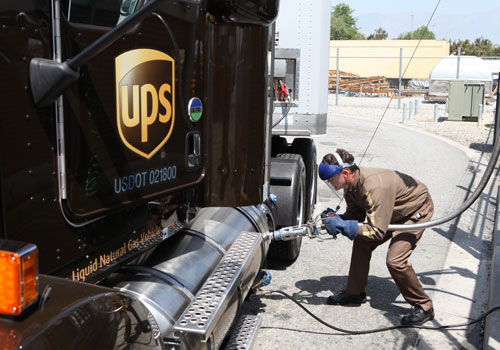 The LNG trucks have a range of about 600 miles

UPS, which announces is financial results for the first quarter later today, already has more than 1,000 natural gas-powered vehicles on the road. Including other forms of lower-emissions vehicles, its alternative vehicle fleet now numbers 2,600, including electric, hybrid, propane, natural gas and biome thane powered vehicles.

The company said it will be building LNG refueling stations at its sites in Knoxville, Nashville, Memphis and Dallas in an $18m development. Once complete, LNG trucks will be deployed on routes between Dallas, Houston and San Antonio.

UPS already operates 112 LNG tractor trailers using external fueling stations in Las Vegas, Phoenix, Beaver (in Utah) and Salt Lake City. And, it has its own LNG fueling station at its site in Ontario, California. LNG tractors have a range of about 600 miles on one refueling.

The expansion project will see UPS running LNG operations in 10 US states.

The company will be benefiting from public sector support for the project, which Davis stating that public-private partnerships can help remove disincentives like fuel taxes on cleaner fuels, to help firms like UPS broaden their deployment of alternative vehicle technologies.

“LNG is a good alternative to petroleum-based fuel for long-haul delivery fleets as it is abundant and produces reduced emissions at less cost. At UPS, we are helping to knock down some of the biggest hurdles to broad market acceptance of LNG in commercial transportation by continuing to establish vehicle demand, fuel and maintenance infrastructures,” Davis said.

“We plan expansion through infrastructure partnerships and a broader fleet in states that are leading the way to make alternative fuel vehicles economically feasible.”


UPS HK  from Parcel from china .co ,ltd is a stable and quick service to USA/UK .and we can provide attractive price to you.


http://www.parcelfromchina.com/express/hongkongups/
(PFC EXPRESS: the news just reprint,only by the purpose of information, does not mean that endorses the idea or prove its description. The article content is for reference only) 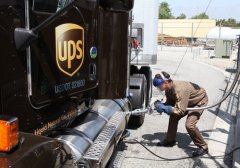