Global express parcel and freight company Aramex has signed an agreement to make more use of rail transport in the United Arab Emirates.

The company has signed a memorandum of understanding with the national railway developer Etihad Rail to use its network for deliveries across the country and cross-border to other Gulf nations.

Etihad Rail is in the process of developing a 1,200km railway network connecting urban areas with the rest of the country.

The project aims to open up trade channels and help with economic development.

The new UAE network will link in with the Gulf Cooperation Council (GCC) Railway Network, connecting with Saudi Arabia via Ghweifat in the west and Oman via Al Ain in the east.

Hussein Wehbe, the Aramex general manager for the UAE, said the new rail network was a “strategic step forward” in the development of the UAE as one of the world’s key transportation hubs.

“The GCC region is one of our core markets and with this partnership Aramex will have multi-modal transportation capabilities, reduced cross-border logistics costs and processes – competitive advantages that strengthen our regional business further. It also fits strategically with our sustainable business model and we believe it will be of immense value to our customers,” he said. 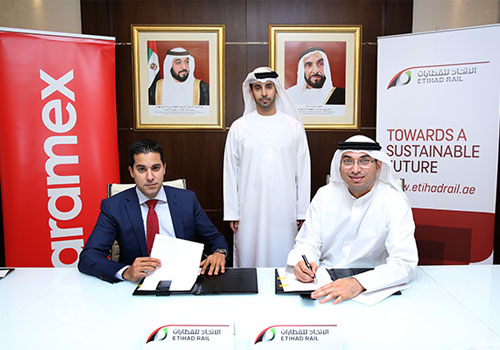 Etihad Rail was established in 2009 to oversee construction of a national freight and passenger railway network, to be built in phases linking centres of population in the UAE as well as linking in with Kuwait, Oman, Qatar and Saudi Arabia as part of the GCC Railway Network.

The development company secured $1.28bn (USD) in bank loans last month for the first phase of construction, in the central part of the UAE, which should be operational in 2014. Tendering is now underway for contracts related to the second phase, which will see a western route linking through to Saudi Arabia as well as expansion into the eastern part of UAE, and should be operational in 2017.

And, Etihad Rail says principal engineering is underway on phase three, which involves the north-east of the country.

Shadi Malak, executive director (commercial) at Etihad Rail, said the new network was changing the face of transportation in the UAE, bringing a mode of transport to the country’s logistics industry offering “efficiency, low costs and environmental benefits”.

He said: “We look forward to working with Aramex and are confident our rail network will offer the most effective means to deliver their customers’ goods across the UAE, and subsequently to bordering GCC countries, in a partnership that signifies yet another achievement for the logistics industry in the region.”

Etihad Rail has been inking a number of agreements with key customers to use its new rail network, including DHL last August.

DHL said at the time it was looking at the project as helping its global “GoGreen” initiative to cut carbon, estimating that one single train on the new rail system would remove up to 300 trucks from UAE’s roads. 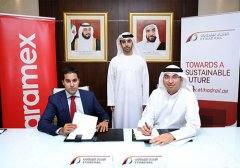