DHL Express is reassuring its international customers that it will be able to get critical shipments into London during the Olympics.

The Games begin in nine days’ time, and are expected to bring travel problems as a network of routes are restricted for use by Games participants, along with congestion from the 5.3m visitors expected.

DHL Express said it has formed a partnership with JogPost, the leaflet distribution company that uses joggers to deliver marketing materials door to door.

It will see jogging couriers added to the DHL Express workforce to allow shipments to avoid traffic congestion and access areas of London temporarily blocked to vehicular traffic during the Games.

Ian Clough, the CEO of DHL Express in the US, assured his customers that his company would maintain its performance delivering to London despite the traffic congestion and activity related to the Games.

He said: “Traffic is estimated to increase on London’s core pickup and delivery routes by more than 30%, so this carbon-efficient method provides the perfect solution to the issue of congestion.”

Kevin Turner, the managing director of London-based JogPost Courier said: “We are pleased to partner with DHL on such an innovative delivery solution for what will be a challenging time for some businesses in the city of London.” 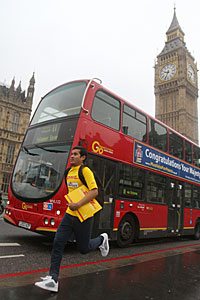 Working with jogging courier specialists JogPost, DHL Express will use foot power to get critical shipments to problem areas in London during the Olympics

DHL Express said it will have a dedicated Operations Control Center working around the clock to monitor problem areas during the Olympics, and “instantly” adapt its network plans to maintain its delivery standards in the light of localised congestion.

Extended opening hours will be provided at DHL Express Service Centres in London to ensure customers can send and pick up shipments conveniently, the firm said.

The London Olympics runs from 27 July to 12 August, with the Paralympic Games running from 29 August to 9 September. The city’s transport officials have set up an Olympic and Paralympic Route Network to ferry participants and visitors between Games venues.

Those mailing and shipping items to London during the Games are being warned of possible delays even after delivery companies have been planning alternative arrangements to beat the restrictions.

Royal Mail is temporarily changing some of its special delivery services to promise next day delivery in London, rather than delivery by 1pm the next day.

Parcelforce will be offering delivery guarantees on its express24 and express48 services to almost all area, except those around official Olympic venues and locations affected by Olympic road events.