Swiss Post has denied making changes to its digital mail service IncaMail in order to settle a legal case with US digital mail technology firm RPost over alleged patent infringements.

Los Angeles-based RPost has been suing Swiss Post in Switzerland and in the United States since late 2009 for allegedly using its patented digital mail technology.

The US company withdrew its lawsuit in Switzerland earlier this month, saying it was satisfied that the state-owned postal operator had told the court it would remove the component at issue – IncaMail’s proof-of-delivery capability.

But, Swiss Post then told the Swiss IT media last week that it was actually making no such changes to its IncaMail service.

Swiss Post spokesman Mariano Masserini confirmed again to Post&Parcelon Friday: “IncaMail customers continue to receive the digitally signed receipt confirmation without any changes. IncaMail customers can continue to use all functions of IncaMail without any restrictions; this includes the secure electronic transmission of confidential information.”

When contacted by Post&Parcel, RPost chief executive Zafar Khan said he was “surprised” by this latest revelation, that Swiss Post was not making the changes he said the company had promised the court it was making.

The RPost CEO said his lawyers had the court filings from Swiss Post that “very clearly told the court that they will no longer provide proof of delivery service in their IncaMail”.

“Swiss Post is two-faced, essentially, depending on who they’re talking to, at what point in time,” said Khan. “It’s amazing that they’ve stooped so low as to start telling the press and the courts completely opposite stories.” 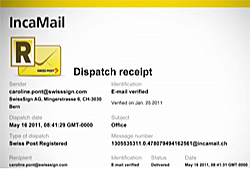 Launched in 2008, Swiss Post’s IncaMail service is promoted to business customers as a confidential, secure and verifiable  rapid communications channel that it is “convenient, flexible, inexpensive and secure as a registered letter”.

The service integrates with existing business software, and works so that when a recipient downloads a message from IncaMail, the message then has a proof-of-delivery time stamp applied.

Khan said on Friday that he believed Swiss Post was now doing the same in Europe as it had in the US, “changing its mind” after telling the courts it would comply with RPost’s patent rights.

“The fact that the day after we dropped the suit, they flip-flopped their story back is no different than their behaviour when we settled the lawsuit in the United States,” he said. “We settled with them, they agreed to exit the US market, then they flip-flopped right back after we dropped the suit and then said they’d like to be in the US market.”

The US lawsuit is now due a scheduling hearing next month, with RPost expecting that a full trial will take place in the summer or autumn of 2012.

Regarding the European lawsuit, Swiss Post is now questioning the validity of RPost’s original patents.

Masserini told Post&Parcel initially on Friday that Swiss Post had not issued a statement at all telling the courts it was removing proof-of-delivery. Then, he suggested that the court documents from which RPost was quoting were “provisional measures”, “submitted to the court more than half a year ago”.

In the months since the filing in question was made, the Swiss Post spokesman said, the court had ordered and received a study into the validity of RPost’s original patent, which he said concluded “that the claims of RPost from its two European patents relevant for the proceedings are not patentable due to a lack of novelty”.

Masserini suggested RPost had actually withdrawn its lawsuit this month because of this opinion regarding its patents’ validity, and not because Swiss Post had promised to remove the proof of delivery component.

The Swiss Post spokesman said his company would now file a lawsuit to declare RPost’s patents invalid. “The question of invalidity will now have to be assessed in the pending proceedings before the Federal Patent Court,” he said.

Khan denied that the validity of the patents were the real reason his company had dropped its lawsuit. “We are 100% confident our patents are valid,” he said. “It’s a false statement that we dropped the suit pressing for the injunction in Switzerland due to any concern of the validity.”

Khan added that if there were concerns about the validity of the patents, his company would not have re-filed the lawsuit in the United States.

Commenting on whether the legal case was likely to head back to the courts in Europe as well as the US, Khan said on Friday: “Our request for injunction was to get them to make the statement to the court that they don’t, nor will they any longer in future provide proof of delivery service. We effectively got what we set out to achieve.

“So now we’ll have to see how we are going to enforce that statement to the court,” added the RPost CEO.